If you’ve traveled in Europe in the fall or winter months, then you probably have seen lines of hunters in the fields as you were driving down the autobahn. Well, what can you do to become one of those hunters? A hunter in Germany is called a Jäger; however, a hunter who is still on their 1st license is called a young hunter, or Jungjäger in German. Once you renew your license then you are no longer considered to be a Jungjäger.

Here in Germany if you fall under the US Forces as active duty, government civilian or contractor you can take a formal German hunting course in English and obtain your German hunting license after you pass all the tests.

The fall hunting course here in Wiesbaden started last Tuesday evening. There is one course in the fall and one course in the spring. The hunting course is very intensive because you will be tested on not only animal biology but also on German terminology. Be sure to come to the course with an open mind and you will learn many things you would never learn by just being a hunter in the USA.

The hunting instructional materials can be found on this site; I would recommend downloading and printing out your own hunting study guide. Click on the tab Titled “Hunting Instructional Material”near the bottom of the page.

You will be expected to attend all the classes that are held Tuesday and Thursday evenings, range days, and some mandatory field events. If, for any reason you are unable to attend you need to inform the instructors prior that class or event to see if its possible to make up for it or get it excused. The classes generally run for 3 hours each evening on Tuesday and Thursday. You will be expected to be present on testing day because the examiners also include local nationals and there is no makeup day. If you do not make it to the test day you will have to take the course over again.

Bring your own food and snack for the range days and evening classes as it is not readily available once you get there.

Besides the course cost, there is the JSW membership cost and, of course, the cost for the ammo you use during shooting practice. It is fairly priced and a necessary expenditure if you wish to pass the test at the end of the course.

The main way of communicating to the students is through email, so be sure to give them your personal and work email. As you’ll see by the schedule when you get it, some classes/events take place during the work day. So, in the event there is a change or cancellation you need to be able to receive the email wherever you may be at that time. There is also a monthly newsletter that comes out from the Wiesbaden Hunting Coordinator, “Guns & Roses”.

There are several field trips as part of the course. There is a mandatory revier visit. This is to familiarize yourself with what a revier is, the equipment you could see in a revier, the types of animals that could be found in a revier, etc.

You will visit the outdoor recreation range and do a pistol familiarization class and fire various pistols. In Germany, pistols are used for two reasons on a hunt; one is for the killing shot if you wounded the animal but did not kill it and two is for defense when tracking down a wild boar.

You will visit a local running boar range several times to practice shooting a running boar target in Eberscheim. You will visit HitPoint Schiesskino, an indoor range where you can shoot running boar and deer you see on a video screen. They will then play back the video and you can see exactly where your rounds went after you’ve finished shooting.

Spring/Fall Cleanup, where the class and other volunteers will go to the Jaegerschaft-Wiesbaden (JSW) outdoor range and clean up the running rabbit range that the class uses weekly. The trip is usually near the time of the testing so the field of fire is clear for the test.

There is usually a trip to the fasanerie, this is a place that is similar to a small zoo that holds mostly German wildlife that can be readily found in Germany. Kind of redundant, I know. But, it gives the students a chance to see the game they will be hunting and make them easier to identify when they are on an actual hunt.

Another possible field trip that I would recommend is going to one of the gun factories here in Germany. It is well worth the time and is usually free, as well. I’ve gone to the Blaser Gun Factory and later I will put up a post on that trip, but now you can see a video I made of the trip here.

The rifle test is shooting a reh and boar paper target out at 100 meters. You will be using a scope and for the reh you will be standing with a stick for support. For the boar you will be sitting and have a sand bag for support. So, I think everybody passes these two tests. Mind you, you still need to take the practice days seriously because its not just hitting the animal but scoring shots in the kill zone as to minimize any suffering for the animal you are hunting.

The shotgun test is with a double barrel 12 gauge shotgun shooting at a moving steel rabbit. If I remember correctly you need to hit the rabbit 8 out of 10 tries. This is the test that people may fail. A lot of people have had practice shooting a stationary target throughout their lives and even if not it is a fairly easy thing to learn, aim, breathe, squeeze, bang. But, the running rabbit/hare, oh my! I put as much time into this training as I could and still was not sure I’d pass come test day.

As far as the written test goes, anything that has been presented or given to you as study material is testable. For example, how many teeth does an adult male Reh have? What is the average number of baby piggies does Mrs. Piggy have in a litter? Okay, it won’t be worded like that, but hey its getting late in the day here so cut me some slack.

After the written test is the oral test, where you and several others will sit in front of a hunter board of people and they will each ask you some questions verbally. Here is where if the test is being given and there are various mounted game on the walls they could ask what is that? (While pointing to one of the birds on the wall)

So there you have it, folks! A brief introduction to hunting courses available to Americans supporting US Forces in Germany. You can see the German hunting community take hunting very seriously and it is said that German hunters are conservationists who like to hunt, hence the lengthy study program that goes into the conservation of wildlife and property.

Let me know in the comments below.

And, on a final note I would be remiss in not letting you know about my German hunting playlist on YouTube of my experiences so far in class and in the field. Please like and subscribe!!! 😉

Best Hunting Clothes in Germany – As a Hunter (Ansitz) 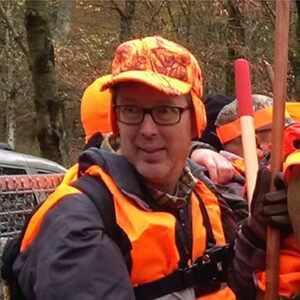 An American Hunter in Germany with a German Hunting License who wants to help other hunters in Germany.